Malana is a beautiful village situated in the state of Himachal Pradesh at an altitude of 2,652 meters (8,701 ft). Compared to the other places of Parvati Valley, Malana has a very different lifestyle and social structure, which makes it unique.

Marijuana has been their cash crop for centuries, and at the beginning of the 1980s, it became a destination for recreational drug tourism. The local peoples of the Malana are very strict toward their customs and beliefs. According to the locals, Malana is one of the world’s oldest democracies, with a well-organized parliamentary system.

The place was inhabited by A sage named Jamlu Rishi, and he made all of the rules for the Village. He is considered to be the god of Malana, and the locals believed that he had been worshiped in pre-Aryan times.

The villagers also believe that they have pure Aryan genes, and they are also descendants of Alexander the Great’s soldiers. The local language is the Kanashi/Raksh, which seems to be a mixture of Sanskrit and several Tibetan dialects. The river Malana Nullah flows through the Valley and comes from the snow-covered peak Deotibba (20,000 ft).

Malana region also has a dam project called the Malana Hydro Power Station, which was started in 1999 and commissioned in 2001. The dam project proved to be fruitful for the region and has brought Malana much closer to the rest of the world.

The most devastating year for the Malana was 2008 because on 5 January 2008, a five hours long fire took place in the Village and destroyed various cultural structures and ancient temples.

Traditionally villagers make baskets, ropes, and slippers from hemp and also produce maize and potatoes to support themself economically. There is no guest house to stay in in the main Malana village. But you can find a few guest houses nearby the Village if you want to stay.

Interesting Thing To Know About Malana

The place grows the finest weed in India and is famous For its Malana Cream, which is a strain of Cannabis hashish and has high oil content and an intensely fragrant aroma.

Outsiders can’t enter the temple, touch villagers or any of their belongings. You may have to pay a fine if you touch any of the Village’s belonging or try to bring the police for help. If the locals get touched by any outsiders, they rush to take a bath.

Videography is strictly prohibited in the Village. You can take photos, but if any villager has any issue, you must immediately stop; otherwise, you may fall into any trouble. So it is recommended to ask for permission before capturing anything.

The locals of Malana consider their beliefs, gods, and language superior to the rest. Their local language Kanashi is supposed to be very sacred, so outsiders can’t speak it.

They have much faith in the godly approach over the rational approach. To resolve the conflict, locals make a deep cut in the foreleg of lambs of each of the two parties, poison it, and sew it back with a needle. The person whose lamb dies first is considered to be guilty.

How To Reach Malana

Reaching Malana By Private Taxi: From the Airport or Railway Station, you can find a private taxi directly to the Jari. From Jari, you have to take another Taxi which will take you to Malana.

Reaching Malana By Public Bus: The Bus will only take you halfway till Jari because there is no public bus service available on the route from Jari to Malana. So from Jari, you have to take a private taxi for your further journey.

Note: Malana is around 4 Km from the point where the taxi will drop you. So from there, you have to trek all the way to the Village.

Where To Stay In Malana

Guesthouses and cafes are not allowed in the main Village, but you can find few places to stay nearby the Village. Otherwise, you can return back the same day to Jari or visit Waichin Valley from there. There are few campsites too, so you can rent a camp or place your own after permission.

Summer is always the best time to visit any hill station because of the pleasant weather conditions. During this time, the Valley will be surrounded by lush greenery, and the weather stays pleasant throughout the day.

During winter starting, from September to November, you will encounter sunny days but frozen nights. But with December, snowfalls starts in the Valley, which causes a drop in the temperature, and trekking becomes a little difficult because of the snow.

If possible, please ignore traveling Malana in Monsoon because due to the heavy and frequent rain, trekking becomes impossible, and rain also increases the chance of land sliding, which is really dangerous.

Things To Do In Malana

Things On Way To Malana

Instead of taking a Private Taxi, me and my friend decided to walk all of the ways to the Malana. Below we are going to mention some of the attractive places we find on the way to Malana from Jari.

Parvati River, here you can sit and enjoy the surrounding view, with the mesmerizing sound of the river.

Places To Visit Nearby Malana 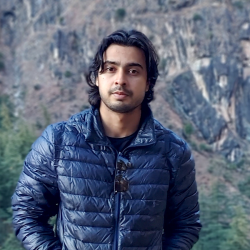 Hi, i'm Rahul Choudhary. I am a content marketer by profession, and a traveller by choice. I am travelling for three years, but occasionally, now I am slowly shifting my career to Travel Blogging as it is the perfect match of my career and passion. I am self-employed, which gives me the complete freedom to work from anywhere. Even I am very much inspired by the digital nomad lifestyle.