If you are planning to visit the Sandakphu, the highest peak in West Bengal.  Check out this travel guide for Sandakphu to find everything about the place.

Sandakphu is situated at the edge of Singalila National Park in West Bengal near to the Indo Nepal border and has a small village on the peak. The place also has some hotels with basic necessity where you can stay after reaching the place.

Previously the place was only popular among the trekkers, but in a few years, it got the attention of common travellers too, which is the good sign in the perspective of tourism.

Recently the state also constructed a new road till Gairibas which covers half of the Trek which makes the travelling to Sandakphu much convenient.

Why Place Is Much Popular

From the Sandakphu peak, you can see a very clear visual of the world’s four highest peaks.

The mountain view of Kanchenjunga is known as Sleeping Buddha; also some refer as Sleeping shiva.

If you will see the Kanchenjunga from Sakdakphu, its formation looks like Sleeping Buddha, resembles the head, face, upper body, and feet of the sage Lord Buddha.

From here you can also get an incredible view of Himalayan Range which you can’t get from anywhere else.

Also, the River Teesta pass through Sandakphu, which gives the hardcore adventurers the option to do river rafting. The very famous Rhododendron and silver fir forests can be only found here in the entire wold world.

Sakdakphu And Its Connection With The Land Rovers

This place has a great connection with the Land Rovers; it is the only local transportation from Manebhanjan to Sandakphu. 1960s model Land Rovers are running on the route to Sakdakphu from the days of the British empire.

The roads from Manebhanjan to Sandakphu is completely dead, it is mainly a trekking route, but locals use the very old Land Rovers on this road, and they are the only one who can afford to drive in those bad conditions.

India and Nepal are two separate countries, and on the route, you have to pass through the Jaubari or Tumbling village which is the part of Nepal, but you will find no clear international boundary on the road. This shows the friendly international relation between Nepal and India.

Recently the state constructed a new road till Gairibas, so now you can cover half of your route to the Sandakphu with the car.

It stays at the 3636 meters of height and the highest peak in West Bengal.

Summer: Average temperature will be 10 to 15 degree Celsius in days, and at night does not go below the 4-degree centigrade.

Winter: The place witnesses heavy snowfall, and the average temperature goes beyond the freezing point. During this time temperature can go down to the minus 5 to 10-degree centigrade.

During the winter peak, the entire place and the route from Kalipokhri to Sandakphu is covered in the snow.

The place remains beautiful the whole year, and in each season you will witness a unique beauty of the place.

The best time to visit the place is following.

Summer From Late Spring To Summer (April to June),

After Monsoon Till Winter Peak (October To December).

The days will be sunny, and at night you will feel more than the average cold. It is possible the temperature goes below the 0 degrees centigrade in the night.

When To Avoid Visiting Sandakphu

During Mansson (July To September)

In mansoon, the velly faces heavy rainfall which causes and increases the chances of Land Sliding. Also, some routes transform into muddy roads which can slow you down and will interrupt your journey at every step.

During Winter Peak (December To February)

How To Reach The Sandakphu?

By Air: The nearest airport is Bagdogra. From here you can take the bus or cab for the Sandakphu. Or you can go to Siliguri from Bagdogra (Around 11 Km from the Siliguri) and can get any public transportation for Sandakphu from there.

Train Route: The nearest railway station to the place is the New Jalpaiguri, from here you can find the cabs services for the Sandakphu.

First, reach the Siliguri and from there get the bus for the Maneybhanjang (the gateway of the Sandakphu)

The Trek will start from the Maneybhanjang, which is the gateway to the Sandakphu. The average trekking time to reach the place is around 12 hrs. You can trek the whole route or can rent a car to avoid trekking. The constructions of new roads make travel easy with the car.

There are different trekking routes, and which route to take depends on the season and your tracking capabilities.

Here we are going to share the most common trekking route preferred by the travellers.

Day 1: The journey will start from the Maneybhanjang till Joubari, which is an ethnic Sherpa village situated on the India-Nepal border. The route will pass through the various beautiful tea gardens and villages. The place is situated on the height of 1951 meter.

Day 2: The second day of trekking journey will end on the Tumling, which is situated on the height of 2880 meter. The trekking route is moderate and will take around 6 hours to reach. The village has few places for night stays. If the weather is good, and there is not much Fogg, then you can see the sleeping buddha from here. 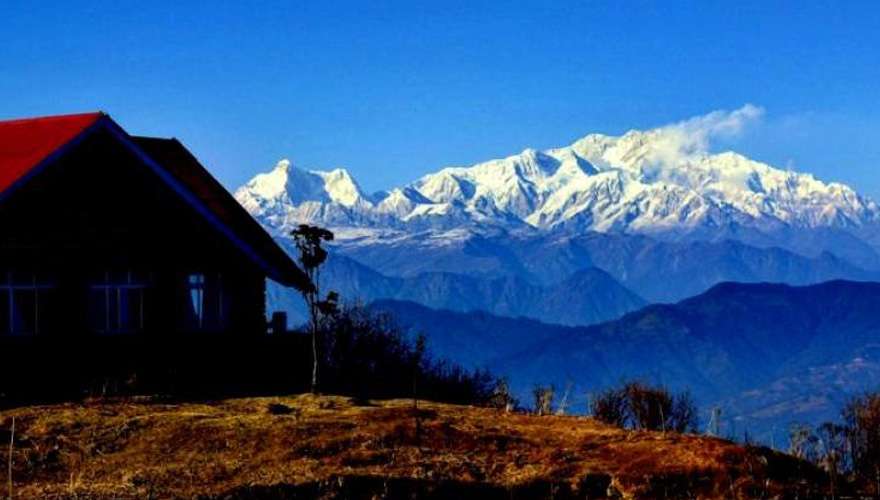 Day 3: The third day of trekking will take you to the Kalipokhri, which will pass through the Gairibas. To reach the destination, you have to trek for around 5 to 6 hours. On the Gairibas you have to pay the entry fee in the check post.

Day 4: This is the final day which will take you to Sandakphu Peak, which is situated at the height of 3640 meters. It will take around 3 hours of trekking to reach your final destination. On the way, once you reach the Bikheybhanjang, you will have to choose from the two routes. One route passes through Nepal which will take a long time in comparison to others route. Or you can choose the other route which is shorter, but it is a steep ascent.

Views From The Sandakphu

How To Reach Phalut From Sandakphu 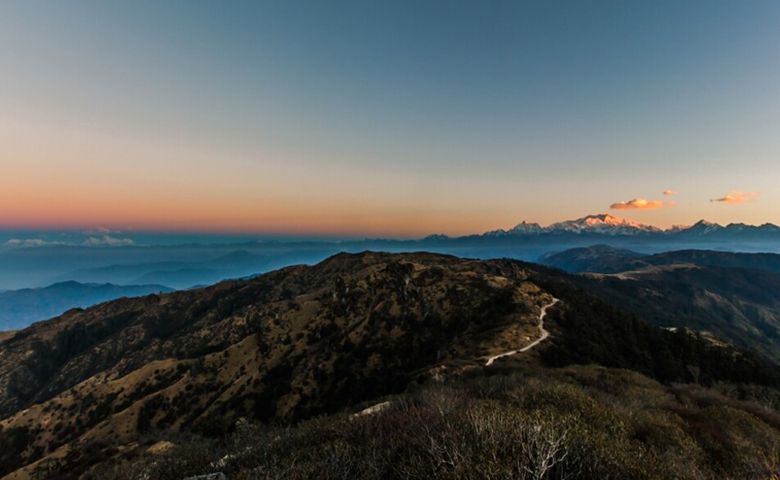 Phalut is situated on the border of Nepal, Sikkim, and West Bengal, and worth travelling. It is just 20 Km away from the Sandakphu, which means after the 6 to 7 hours of trekking you reach the place.

On the way to Phalut, you will watch beautiful mountain ridges, meadows and deep forests. And if you come here in April or May, you will see the forest filled in the colour of Rhododendron.

The Other Places To Cover On Way

Gorkhey: A less popular but a gorgeous valley village which is just 13 KM from the Phalut. So if you are not bound with the time, then you must visit this incredible beauty village. The place is surrounded by thick pine forests and river Gorkhey Khola which is a small river passing through the village.

Things You Should Consider Before Travelling To Sandakphu Summit

Rahul Choudhary
Hi, i'm Rahul Choudhary. I am a content marketer by profession, and a traveller by choice. I am travelling for three years, but occasionally, now I am slowly shifting my career to Travel Blogging as it is the perfect match of my career and passion. I am self-employed, which gives me the complete freedom to work from anywhere. Even I am very much inspired by the digital nomad lifestyle.

Bangriposi | How To Reach | Best Time to Visit | Nearby Attractions