Pondicherry, the name throws flashes of colorful French colonies, magnificent churches, and sun-kissed beaches. But there is more to it that Pondicherry has to offer. The place has a long association with temples, and some of the temples in Pondicherry are as old as from the 10th century AD.

With a lot of Tamil culture dominance here, temples form a major part of your Pondicherry tour. Let us quickly glance at some of the famous temples in Pondicherry that stand out not just for their significance to the religion but also because of their architectural beauty.

The vibrant exteriors of the building and the gopuram draw the quick attention of the visitors to the Arulmigu Manakula Vinayagar temple. The temple is believed to be more than 350 years old and is dedicated to Lord Ganesha.

The deity in this temple can be seen in the company of two consorts, namely the Riddhi and the Siddhi, which makes it a unique sight to witness. The architecture of this temple is in a Dravidian style which is common in South Indian temples. The interior is magnificent, drawing you to the different forms of Lord Ganesha.

The golden chariot is made of 7.5kgs of gold and teakwood and is the center of attraction. The temple also has a shrine of Lord Murugan, who is Lord Ganesha’s younger brother.

Vedapureeswarar Temple is an important landmark, and the deity is prayed to in the form of a lingam. The architecture of the temple is in the Dravidian style. The temple has a 75 feet gateway tower or the rajagopuram.

There is also a shrine of Lord Parvati in the form of a Tiripurasundari. A water tank in the temple premises enhances the beauty of this place. The temple is located in the Heritage Town on the Mahatma Gandhi Road and is open from 6:00 am to 12:30 pm in the mornings and 4:30 pm to 8:00 pm daily.

The Varadaraja Perumal Temple is located in the central town of Pondicherry in the Heritage Town, and the place defines religious splendor.

The temple is believed to be more than 800 years old. It is a Vishnu temple built by the Chola Empire in the 11th century. It is one of the oldest temples in Pondicherry. The deity in the temple is standing, and he is accompanied by Bhudevi and Sridevi.

The temple has a rajagopuran of five-tier and is 110 feet in height. Similar to other temples in Pondicherry, it has a Dravidian-styled architecture that depicts the flawless craftsmanship of the architect.

There is a mirror hall which is a major attraction of this place. 83 springs flow in the temple tank, and devotees believe that taking a dip in this water is beneficial as it has medicinal properties. The temple is located in Heritage Town and is open from 6:30 am to noon and from 4:30 pm to 9:30 pm daily.

Durga is a worshiped goddess in the Hindu culture, and she is worshiped in many forms. One of them is Kamakshi. The devotees pray to the incarnation of Goddess Durga. The shrine is believed to be as old as 500 years, and it has a large gopuram at the entrance, which is typical of most temples in the South of India.

The main temple lacks ornamentation, which sets this temple apart from the others. The devotees come here to pay their respect to the temple goddess. The footfall increases manifold during the festival season.

Villianur or the Sri Gokilambal Thirukameswar Temple is a famous temple in Pondicherry, and its amazing architecture draws many to appreciate its grandeur and beauty.

The main deity worshiped here is Lord Shiva, who is prayed in the form of a Shiva linga Thirukameswar. Gokilambal is the goddess who is worshiped along with Shiva.

The temple dated back to the 12th century and was believed to have been built during the reign of the Chola dynasty. It is believed that a Chola once suffered from leprosy and then prayed to Lord Shiva and was cured, and thus the temple was built as a mark of gratitude.

You can appreciate the beautiful gopuram that is the gateway to the temple. There are carved and adorned images with pillars that are well ornamented in the interior, which lets you experience serenity and beauty.

The Temple Car festival is an attraction here that is held annually. People pull a 50 feet tall chariot during this festival. It is believed that those who pull the chariot are blessed by Lord Shiva. You thus can see thousands flocked here during the festival. The temple is operational from 5:00 am to 12:00 noon in the morning and from and 4:00 pm to 9:00 pm each day.

The Sithananda Swamy Temple should find a prominent place in the list of the best temples to visit in Pondicherry. It is not a typical temple that is built to worship a deity.

The temple honors the teachings and memories of the Guru Sithananda Swamigal saint. The temple is from the 19th century and is the Jeevan Samadhi of the saint. You can see a Shiva linga on the spot of the Samadhi.

The temple is located in a place that draws a lot of hustle and bustle through the day. However, the temple in itself is very serene. You feel as if you have been transported to a different world. The main hall is colorful and is refreshing. Some pillars are beautifully sculptured.

The ceiling and the hall exude its intricate paintings. The temple sprawls to an area of 44670 sq feet, and you can appreciate shrubs, trees as well as a pond in the temple premises.

The bell in the temple has been made in France and has the saints’ image engraved in it. You can experience tranquillity here, which makes it a must-visit place on your trip to Pondicherry. The temple is located in SH 49, Karuvadikuppam.

This is an old Shiva temple and is famous for being one of the Devara Paadal Petra Shiva Sthalas. Lord Shiva is worshipped here in the form of a Mahakaleshwar. The temple was built by King Kulothungan III in the 7th century. The king belonged to the Chola dynasty.

The temple has an Ekadala architecture style. What makes this place peculiar is that you can see some broken Shiva linga pieces that have been woven using a copper thread.

The temple is located in a very picturesque surrounding, and the temple complex has a huge water tank. There are banyan and coconut trees that line the pathway that makes the ambiance refreshing.

The Panchavato Anjenya Temple is a Hanuman temple, and it houses the deity, which is 32 feet tall. Several tourists are drawn here daily; however, the footfall increases drastically on Saturdays, which is the day when Lord Hanuman is worshiped. The temple is made of 12 acres of land.

The temple is located on the Pondicherry-Tindivanam Road and is operational from 7:00 am to 11:00 am in the mornings and from 5:00 pm to 8:00 pm in the evenings every day.

The Navagraha Temple worships the nine planets in Hindu mythology. You can see huge statues of the planet gods here. The largest is the Saneeswara or the Saturn god.

The Saneeswara god is 27 feet, while the others are 15 feet. The temple is usually visited by those who are suffering from some hostile effects on the planet.

It is believed that if you worship the deity that has been affecting you, then your problems will be resolved. The overall beauty of this temple draws many tourists to it.

The temples in Pondicherry are a reflection of the history of this place. There is a lot of Tamil influence in these temples. Each of the temples is different and unfolds the architectural craftsmanship of the skilled craftsmen of that era.

You should take out time to explore these magnificent temples when in Pondicherry. It is a wonder to explore your spiritual roots amidst the aura of Pondicherry. 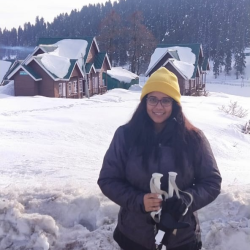 Hi! I am Jyoti (Guest Author), taking you on this breathtaking journey to explore some of the best destinations from across the world. Be it the hill or the valley, desert or the sea, city or a village let us together unravel the charm of some of the best places on this planet. Here I am to share my personal travel experiences with you to help make your journey as seamless as possible.